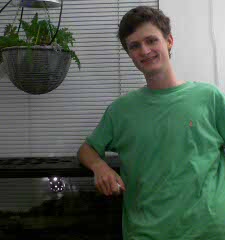 My name is Ian. I am also known as SDCPs (San Diego Carnivorous Plant(s)) on Arachnoboards and carnivorous plant forums such as Terraforums--This is a link to my CP growlist. I am a hobbyist who enjoys growing carnivorous plants and keeping and breeding millipedes. I've compiled all the information on this site through personal experience and research. The animals for sale were captive bred from my domestically obtained stock. As you might have guessed, I'm located in San Diego, California.

I started keeping millipedes in January of 2012. Before that I purchased an AGB at Petco for 12 (2004 or so) because I was so fascinated with the AGB I had seen at school. But my parents would not let me keep her in the house and I quickly lost interest. She ended up escaping from her dry enclosure in the garage. I was very upset and spent several hours looking for her--after all, I did like her and $12 was a great deal of money for me back then--and I would only buy things I really wanted. I later found her in a box in the garage...the poor thing had been eating an instruction manual.

I started keeping millipedes in January 2012 after my brother offered to buy me a birthday present. I decided I wanted millipedes (I do not keep tarantulas or any other insect, so it was millipedes in particular I was after and this was, admittedly, an unusual request.) We purchased 3 each of some North American natives at LLLReptile: gordanus, americanus, and ebony millipedes. I also purchased, Millipedes - Professional Breeder's Series, by Shurá Sigling. (LLL carries this for a ridiculously low price a former retailer of the book told me. You can purchase it online. This book is full of descriptions of fascinating species which are unavaliable in the US hobby, so if you can't bear to drool over species you cannot have, please don't get it. Get Orin McMonigle's Millipeds in Captivity: Diplopodan Husbandry and Reproductive Biology (Millipede Husbandry) instead or in addition but be wary of his substrate advice as the "base substrate" I used--organic compost which seemed so promising--gave me nothing but trouble. I prefer Shura's substrate recipe.) I then finally found an expensive online source, Ken the Bug Guy, for Giant African Millipedes. (If you want to purchase these, please save yourself some trouble and buy from Ward's Scientific instead.) I bought 2 females for $65 each and 1 male for $135. I later purchased 5 flameleg millipedes for $45 each--two of which were unhealthy when I received them and died afterwards.

Nearly a year later I traded for multiple native and exotic species and had 10 total. And individual enclosures--often several--for each one. My parents and close friends didn't like my new hobby very much and pressured me to get rid of the millipedes. I did for most of them, but had so many flameleg babies I kept those. After some time I re-entered the hobby with some of my favorite species such as the Philippine blues, and was successful with them. Recently my family disowned me for not going to medical school or attending their cultish church, and I moved into a RV. I kept millipedes in it for a year, and they survived and reproduced some, but heating them in the winter was a tremendous drain on my solar system and I couldn't give them enough space to really thrive. So I decided to end my adventures in this wonderous space. The website doesn't cost anything to host, and I hope you enjoy it! I am also avaliable to answer questions, although the arachnoboards myriapods forum will probably be more helpful :)
UA-34745557-1