See Video (not mine):

This millipede was spotted near "Elephant Plains Game Lodge, Sabi Sand Game Reserve adjacent to Kruger National Park in the northeastern corner of South Africa. It is tucked up along the border with Mozambique...We arrived at the lodge the same day that Mozambique was hit by a cyclone (hurricane). Even so, the storm whacked us pretty hard. We saw a perennially dry riverbed flood and rise over 20 feet....When we were finally able to go out into the reserve it was very muddy...The 'pede in the photo was about 4 feet high on the tree. It was not moving...The temperature at the time of the bug pic was probably around 75 degrees F and it was, of course, quite humid. That said, I've attached some photos that I took to help give you a sense of place."--Rand Smedley 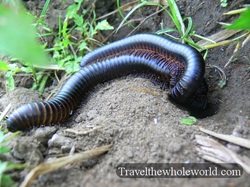 "The majority of African insects live in the humid rainforest regions of central Africa. But of course they are found in large numbers all over the continent. The giant millipedes I saw where all along the banks of a river in the dry season of northern Africa. I did a long hike through the area and saw no millipedes until I got to the banks, and then suddenly there were dozens of them, most mating like in the photo above."--Millipedes were photographed in Dinder, Sudan. Commentary and photograph copyright George Kashouh, owner of Travelthewholeworld.com.
UA-34745557-1