Trigoniulus macropygus Flameleg Millipedes come from Negros Island in the Philippines. They are one of the most beautiful and striking millipedes one can keep. Flameleg millipedes are easy to breed and generation time is about 1.5 years. With this species, a mating spike typically means your millipedes have just matured and eggs will soon follow (this cannot be said for most species). However, flameleg millipedes are not very hardy. I like to compare them to canaries in a mine. Miners used to take birds, such as canaries, with them into mines because these birds would behave strangely or die--before the miners would--if the air quality in the mine was not good. Think of flamelegs as your early warning system. If something is wrong they will die before your other millipedes. While this does add a twist to an otherwise fascinating and easy-to-keep species, that's the nature of the beast!

Flamelegs will get about 4" long. Their lifespan is ~2+ years. Males can be distinguished from females in two different ways. Primarily, as males have gonopods, close to their heads they have a gap in their neat rows of legs, about the 7th segment or so. Females have a continuous row of legs. They can also be differentiated by the side and color of their legs. A trained eye can instantly spot a full grown male, his legs are extremely yellow and they are large relative to the female whose legs are both shorter and thinner, and have a dusty yellow color. 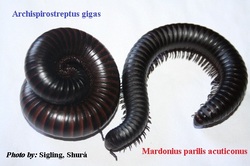 AGMs, also known scientifically as Mardonius parilis acuticonus, are the next big sensation in the US millipede hobby. These friendly millipedes are replacing their larger cousins Archispirostreptus gigas, aka AGBs, which do not breed readily in captivity and were mostly imported. Wild-caught millipedes can no longer be imported since the USDA has restricted import of many exotic animals (many of which are no threat) to prevent the introduction of additional invasive species to our environment.

This means that those few aging AGBs which are left in the US are probably the last our hobby will see--for a while at least. Fortunately, a handsome replacement exists! The satin black exoskeleton and folksy manner which AGMs posses offsets their smaller size of about 8". Not to mention actually holding a 11" monster is no easy (nor fun IMHO) task--one must constantly alternate hands as they crawl. AGBs actually have sharp claws, and 200 claws on an arm results in a very prickly sensation indeed, so I would argue that AGMs are actually better pets--they more manageable if you handle them.

Due to the unavaliability of ABGs and the good size and handling characteristics of AGMs, it is my firm belief that Mardonius parilis acuticonus (aka AGMs) is destined to replace Archispirostreptus gigas in the US Hobby.

AGMs are hardy. They take 5-6 years to reach adult size. (I am not sure how long they live as adults. My current impression is that they die randomly and some don't live long while others live several more years.)

READ MORE HERE! (Slightly different name used in this report, but same creature. AGBs are the larger of the two types of millipedes he had.)